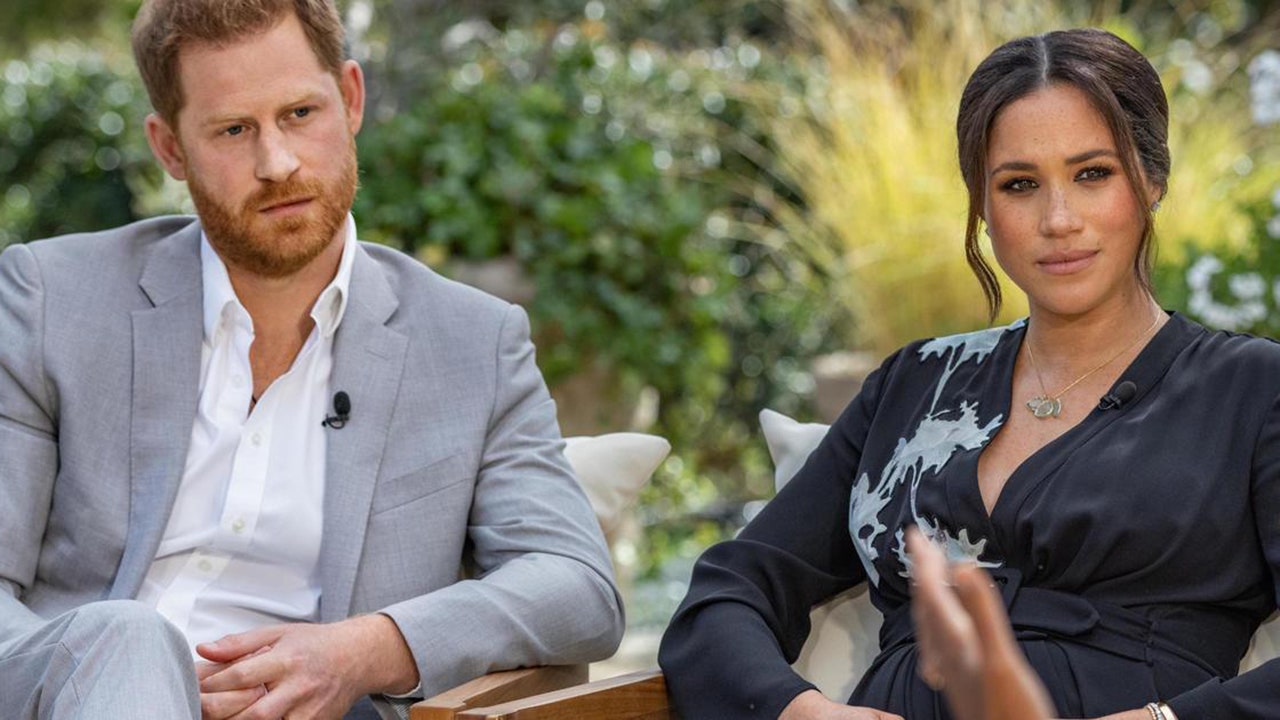 Meghan Markle and Prince Harry’s journey to financial independence has been a roller coaster ride.

The Duke and Duchess of Sussex managed to stir global headlines throughout 2021 as they settled into their new lives in California. From their bombshell interview with Oprah Winfrey that was viewed by nearly 50 million people worldwide, to the arrival of their daughter, Lilibet, the couple faced plenty of ups and downs in the spotlight. It’s safe to say that everyone – including the royal family – wondered, “what’s next?”

THE BIGGEST CELEBRITY SCANDALS OF 2021

Meghan Markle and Prince Harry previously announced they were stepping back as senior members of the British royal family.
(AP)

In February, Buckingham Palace confirmed that Markle and Harry wouldn’t be returning as working members of the British royal family. “Following conversations with The Duke, The Queen has written confirming that in stepping away from the work of The Royal Family it is not possible to continue with the responsibilities and duties that come with a life of public service,” the statement read. “While all are saddened by their decision, The Duke and Duchess remain much loved members of the family.”

Getting real about ‘The Crown’

During a February appearance on “The Late Late Show,” Harry told James Corden that he thinks the hit Netflix series is truer than some of the news stories that have been written about him and his wife. “They don’t pretend to be news,” Harry explained. “It’s fiction. But it’s loosely based on the truth. Of course, it’s not strictly accurate…I’m way more comfortable with ‘The Crown’ than I am seeing the stories written about my family, or my wife, or myself. That is obviously fiction – take it how you will. But this is being reported on as a fact because you’re supposedly news.”

Markle is accused of being a bully

Just days before the Duke and Duchess of Sussex’s sit-down with Winfrey, The Times alleged that Markle faced a bullying complaint made by one of her close advisers. However, Markle’s team strongly refuted the claims. “The Duchess is saddened by this latest attack on her character, particularly as someone who has been the target of bullying herself and is deeply committed to supporting those who have experienced pain and trauma,” a spokesperson for the couple said in a statement sent to Fox News. “She is determined to continue her work building compassion around the world and will keep striving to set an example for doing what is right and doing what is good.”

This image provided by Harpo Productions shows Prince Harry, from left, and Meghan, The Duchess of Sussex, in conversation with Oprah Winfrey.
(AP)

During the couple’s televised sit-down in March, Harry told the media mogul he felt trapped by royal life and was surprised that he was cut off financially and lost his security. Harry also said he felt his family didn’t support Markle, who acknowledged her naïveté about royal life as she endured tabloid attacks. Markle, who is biracial, described how when she was pregnant with her son, Archie, there were “concerns and conversations about how dark his skin might be when he’s born.” The Duchess also described the intense isolation she felt inside the palace that led her to contemplate suicide. Following the interview, Buckingham Palace said the allegations of racism were “concerning” and would be addressed privately.

In May, Harry teamed up with Winfrey to launch “The Me You Can’t See,” a mental health series on Apple TV+. In it, Harry described what his father, Prince Charles, used to tell him as he struggled emotionally. “He used to say to both William and I, ‘Well, it was like that for me, so it’s gonna be like that for you,'” said Harry. “That doesn’t make sense. Just because you suffered, that doesn’t mean that your kids have to suffer. In fact quite the opposite, if you’ve suffered, do whatever you can to make sure that whatever experiences, negative experiences you had, that you can make it right for your kids.”

In June, the couple welcomed their second child, a daughter named Lilibet “Lili” Diana Mountbatten-Windsor. The name pays tribute to both Harry’s grandmother, Queen Elizabeth II, whose family nickname is Lilibet, and his late mother, Princess Diana. The baby is “more than we could have ever imagined, and we remain grateful for the love and prayers we’ve felt from across the globe,” the couple revealed.

Random House Children’s Books announced that Meghan Markle was releasing her first children’s book titled “The Bench,” which is inspired by the relationship between her husband Prince Harry and their son, Archie.
(AP/Getty)

In June, the Duchess wrote her first children’s book titled “The Bench.” The picture story aims to celebrate the bond between Harry and Archie, as well as fathers and sons in general. Markle said the book began as a Father’s Day poem written a month after Archie’s birth, in 2019.

In July, Harry and his older brother, Prince William, reunited in the U.K. to unveil a statue of their late mother on what would have been her 60th birthday. It was the second time the brothers appeared together in public since Harry stepped aside from royal duties. The first was when their grandfather, Prince Philip, died in April at age 99. Royal watchers were hoping the meeting would lead to a reconciliation. During his interview with Winfrey in March, Harry confirmed rumors that he and William had been growing apart, describing their relationship as “space at the moment.” Despite their differences, one thing was clear – Diana’s memory is something that continues to unite the princes.

PRINCE HARRY FELT HE WAS ‘BEING ERASED FROM THE FAMILY’ AFTER QUEEN ELIZABETH’S PHOTO SNUB, BOOK CLAIMS

Prince Harry will be releasing a memoir in 2022.
(Kevin Mazur/Getty Images for Global Citizen VAX LIVE)

In July, Random House announced Harry is writing “an intimate and heartfelt memoir” that is expected to be released in late 2022. “I’m writing this not as the prince I was born but as the man I have become,” said Harry. “I’ve worn many hats over the years, both literally and figuratively, and my hope is that in telling my story — the highs and lows, the mistakes, the lessons learned — I can help show that no matter where we come from, we have more in common than we think. I’m deeply grateful for the opportunity to share what I’ve learned over the course of my life so far and excited for people to read a firsthand account of my life that’s accurate and wholly truthful.”

In September, the couple landed a coveted spot on Time magazine’s 100 Most Influential People list. “They turn compassion into boots on the ground through their Archewell Foundation,” chef José Andrés wrote in a short essay about the pair. “They give voice to the voiceless through media production. Hand in hand with nonprofit partners, they take risks to help communities in need — offering mental-health support to Black women and girls in the US and feeding those affected by natural disasters in India and the Caribbean.”

Meghan Markle and Prince Harry pose for pictures after visiting the observatory in One World Trade in New York on Sept. 23, 2021.
(AP Photo/Seth Wenig)

In September, the couple paid New York City a royal visit, marking their first major joint public outing since becoming parents. During their visit, the duke and duchess met with New York Gov. Kathy Hochul and Mayor Bill de Blasio. It was revealed that the pair were making an appearance at the Global Citizen Live, which was broadcast live from Central Park. During their appearance, they advocated for vaccine equity. Harry and Markle also paid a visit to a Harlem elementary school as well as Melba’s Restaurant.

In November, Politico reported that Markle personally reached out to members of Congress to campaign for paid family leave. The news came weeks after she wrote an open letter to Speaker of the House Nancy Pelosi, D.-Calif., and Senate Majority Leader Chuck Schumer, D.-N.Y., published by Paid Leave for All. According to the outlet, it was Sen. Kirsten Gillibrand, D.-N.Y., who gave the phone numbers to the former American actress. The 54-year-old has pushed her party to include paid leave in its social spending bill.

PRINCE WILLIAM WAS WARY ABOUT PRINCE HARRY SLAMMING THE PRESS ABOUT MEGHAN MARKLE FOR THIS REASON: BOOK

The Duke and Duchess of Sussex made a grand entrance at the Salute to Freedom Gala.
(Theo Wargo/Getty Images for Intrepid Sea, Air, & Space Museum)

The couple honored veterans at the 2021 Salute to Freedom Gala at New York City’s Intrepid Museum ahead of Veterans Day in the U.S. and Remembrance Day in the U.K. During his appearance, Harry discussed the isolation service members, stressing the importance of supporting our veterans. Harry served a decade in the British army and two tours in Afghanistan. “My experience in the military made me who I am today, and I will always be grateful for the people I got to serve with – wherever in the world we are,” said Harry.

Getting goofy with Ellen DeGeneres

In November, Markle appeared on “The Ellen DeGeneres Show” and pranked vendors at the studio lot. The Duchess mewed in cat ears, devoured hot sauce on crackers like a chipmunk and held a huge crystal to her face — all after a pretend assistant told the trio of sellers to treat her just like everybody else. Later, the two women welcomed Brittany Starks, a Tennessee mother and hairdresser who gave back after being helped herself through hard times by braiding the hair of schoolchildren for free. Since then, she has started a charity, A Twist of Greatness. The show and philanthropy partner TisBest donated $20,000 to her cause. Markle and Harry matched it with another $20,000.

In December, Markle won the latest stage in her privacy lawsuit against a British newspaper, when three senior judges ruled its publisher breached her privacy by reproducing parts of a letter she wrote to her estranged father. She noted that the Court of Appeal ruling was a victory of “right versus wrong.” She also issued a call to “reshape a tabloid industry” that has long been the bane of both celebrities and British royals. Losing claimant Associated Newspapers said it was considering an appeal to the U.K. Supreme Court.

The Associated Press contributed to this report.