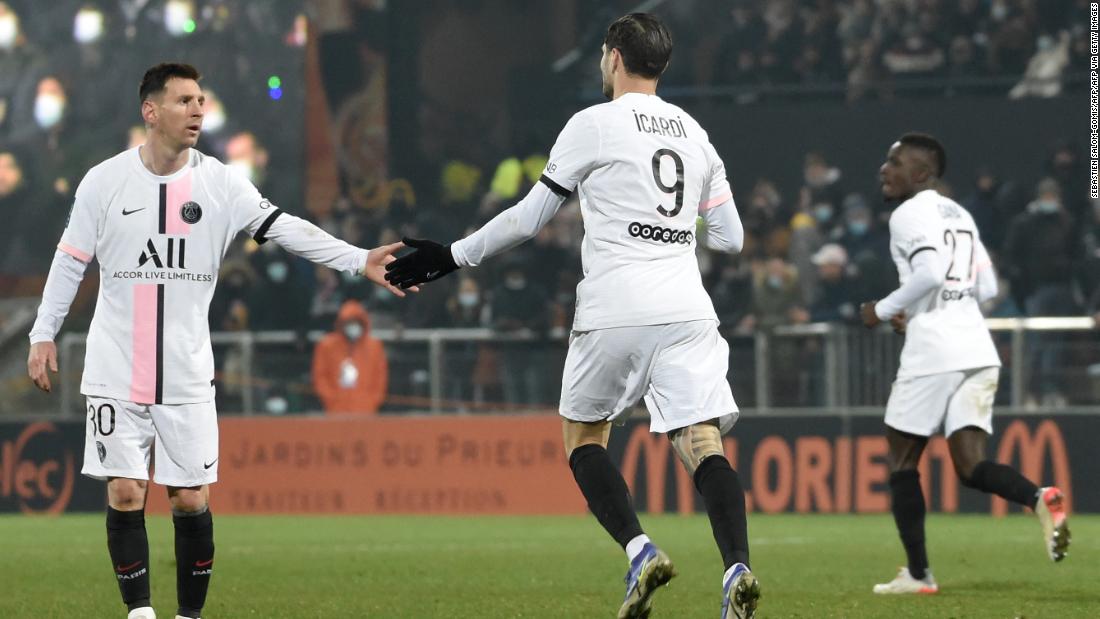 Mauricio Pochettino’s side, who had Sergio Ramos sent off, have 46 points from 19 games with Nice in second place 13 points behind after a 2-1 comeback win at home against RC Lens.

Third-placed Olympique de Marseille, who have a game in hand, trail Nice on goal difference after being caught cold at the Velodrome in a 1-1 draw against Stade de Reims, Dimitri Payet salvaging a point with a penalty eight minutes into injury time.

Stade Rennais are fourth on 31 points after a 2-1 defeat at Monaco.

Elsewhere, Montpellier consolidated their fifth place with a convincing 4-1 home victory against mid-table Angers and champions Lille moved up to eighth when Jonathan David’s late goal gave them a 3-2 victory at Girondins de Bordeaux.

The game between Clermont and Racing Strasbourg was postponed because of foggy conditions.

At Lorient’s Moustoir stadium, PSG were not only without the injured Neymar, but they also had to cope with the suspensions of Kylian Mbappe and Marco Verratti and they lacked inspiration.

Lorient’s Thomas Monconduit opened the scoring against PSG with a superb, slightly-deflected strike that went into the top corner five minutes from the interval.

While Lionel Messi had a couple of chances after the break, the visitors had their first shot on target in the 81st minute when the Argentine forward’s strike was parried by Paul Nardi.

Ramos, who had replaced Nuno Mendes at halftime, was then sent off with five minutes left after picking up two yellow cards on a night to forget for the capital side until Icardi headed home from Achraf Hakimi’s cross two minutes into injury time.

The result left Lorient second from bottom on 16 points, four ahead of St Etienne who were beaten 1-0 at home by Nantes.